It had been four long years, but when Roberto Mancini finally handed Mario Balotelli an Italy recall for the end-of-season friendlies against Saudi Arabia and France, there were few who questioned the Nice forward’s place in the squad.

The days of ‘Why Always Me?’ appeared to be over, with the striker coming off the back of a career-best campaign in which he had scored 18 league goals and shown a level of maturity previously conspicuous by its absence from both his game and his behaviour.

Club coach Lucien Favre had whipped him into the shape, while the birth of his second child, Lion, appeared to have helped him belatedly grow up, at the age of 27.

Indeed, his attitude – for so long the underlying weakness in his game – was actually being praised. Favre was aware that it was not perfect, he would have wished the striker to have been a more willing worker from a defensive perspective, but the ill discipline and outright laziness than Balotelli was infamous for appeared to be a thing of the past.

That Mancini – a coach who had endured a volatile relationship with the forward in the past, at Inter and Manchester City – was willing to show faith in him and even make him Italy captain, appeared to be the rubberstamp on the attacker’s renaissance, after troubled spells at Liverpool and Milan, where he managed only two league goals over two seasons.

“In the last four years, I’ve had a detox,” Mancini smiled while addressing the player’s international recall in an interview with Canale 5 over the player’s recall. “Joking aside, I’ve found him open and with a desire to work. After that, as I’ve always said, the rest depends on him and what happens in his head.”

Clubs were understandably circling a player agent Mino Raiola billed as being “worth €100m”.

All the big Italian clubs were cited by the representative as taking an interest, with Juventus, Roma and Inter mentioned by name.

Napoli, however, appeared the most likely destination, yet it was Marseille who emerged as the frontrunners.

However, at the end of May, Balotelli admitted, “To be honest, I know nothing about my future.” Fast forward more than two months, and that still appears to be the case.

News broke in early July that Balotelli had agreed terms with OM, turning down a move to the Chinese Super League, where he was offered a reported €30 million per year.

Instead, a two-year deal with the Stade Velodrome club had allegedly been agreed. But with everyone waiting with the expectation of the deal being officially ratified, there came only silence.

In the meantime, Balotelli – who angered Nice by failing to report on time for pre-season training under new coach Patrick Vieira – finds himself in limbo, having been publicly criticised in an open letter by one of the club’s Ultras groups.

He is back in training, albeit working away from the first-team squad. Instagram-mad Balotelli has posted videos of himself working with Desmond N’Ze, a Ghanaian centre-back who was last active in 2014 playing in the Japanese lower leagues with Fujiedad MYFC. Hardly the top-level preparation clubs are seeking.

Each day wasted is another that the Italian will have to work doubly hard to make up for when he does eventually make his return to the competitive arena, whomever that may be for.

The root cause of the problem appears to be a dispute over his contract. Raiola has claimed that it expired last summer, while Nice are insistent it still has a year to run and, therefore, a transfer fee is required for his services.

“It’s a very simple transfer,” an unnamed spokesperson for Nice told L’Equipe on July 26. “Mario and his agent were told that he could leave; he just needs to choose his club and he can go.”

Of course, it is not quite so simple, as the Ligue 1 outfit are demanding a fee in the region of €10m for the attacker’s release, a sum that would eat into the earning potential of the striker at the type of club liable to move for him.

Marseille, for example, cannot afford to pay him as lavishly as he would like, while also paying Nice and arranging compensation for Raiola as the agent to broker the deal.

“This is a unique situation, not normal in football,” OM sporting director Andoni Zubizarreta said. 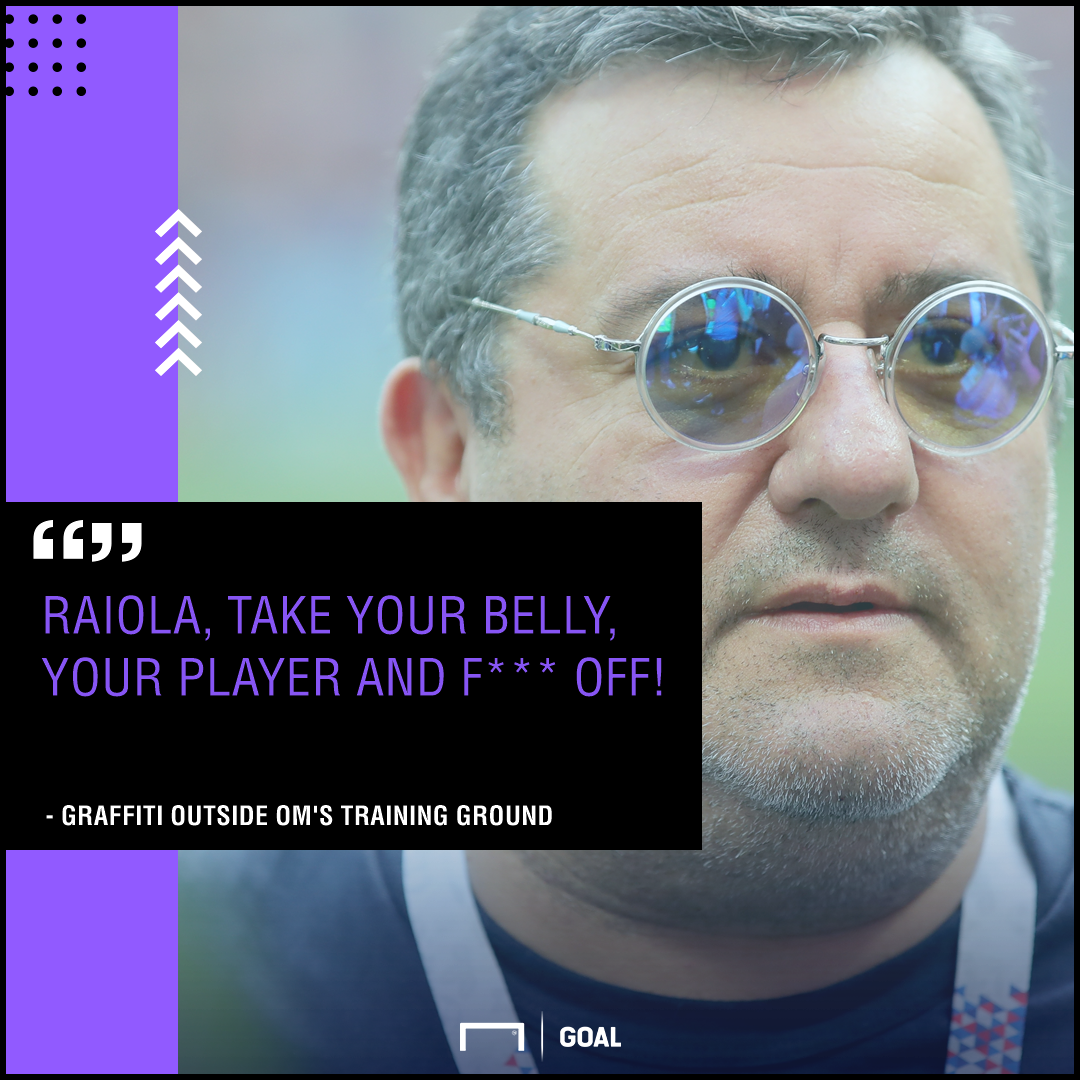 Claims and counterclaims have been fired between the clubs via unnamed sources in the media. Unattributed sources have claimed that Marseille have found Nice belligerent in their negotiations, while others have even claimed that Balotelli has told team-mates that the deal has been held up by late interest from Paris Saint-Germain.

OM fans, who have voted unanimously on unofficial webpages that it is time to move on, have made clear who they believe to blame.

Outside the club’s training centre, graffiti appeared last month reading: “Raiola, take your belly, your player and f*** off!”

In such an opaque environment, it is impossible to know exactly what the truth of the matter is, and the probability is that all parties – Nice, Marseille, Balotelli and Raiola – are all, to varying degrees, to blame.

Certainly, Super Mario’s future is no closer to being resolved.

Parma – a far cry from Juventus or Milan – are now linked with a move if they can acquire the player for free, while Nice Matin has reported that the player may yet even remain at the Allianz Riviera with a new contract and a healthy pay increase.

What is evident, however, is that the current situation is helping no-one – Balotelli, least of all.

His career was back on track at the end last season. As the new one approaches, it already appears on the verge going off the rails again.