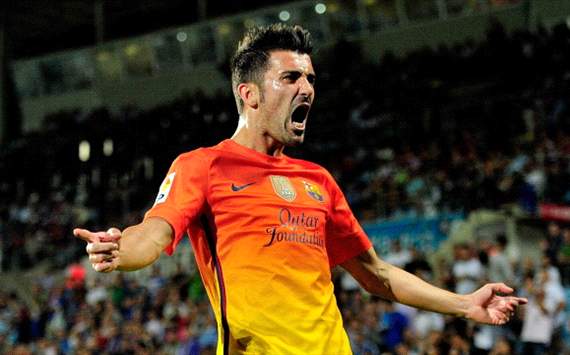 Arsenal’s pursuit of David Villa is unlikely to continue into the summer after they failed with a deadline-day pursuit of the Spain forward.

The Gunners bid around £11 million for Villa in the last few days of the window and still held out hope of signing him right up until the final hours of a frenetic last day for the club.

Despite Villa making it clear that he wanted to move to Emirates Stadium, Barcelona held firm in their desire to hang on to Spain’s all-time record goalscorer until the summer.

It is understood that the runaway La Liga leaders might have caved in had they received an offer they felt they could not refuse for the 31-year-old, who has only been a bit-part player at Camp Nou this season.

Arsenal are likely to turn their attention elsewhere for a new centre-forward in the next window, even though Villa’s value will have decreased by then as he will only have 12 months remaining on his Barca contract.

The striker will be only four months short of his 32nd birthday when the new season starts and there are misgivings about giving him a lengthy contract of three years or more.

Everton’s deadline day bid for Sevilla striker Alvaro Negredo failed as the Spanish side refused to drop their £15 million asking price despite offering the forward to a number of English clubs during the January transfer window.

Sevilla president Jose Maria del Nido wanted to cash in on Negredo to ease the club’s financial difficulties and offered the player to up to eight Premier League sides after a visit to London earlier in the month.

Tottenham and Chelsea also expressed an interest in the Spain international but it became clear that Del Nido was unwilling to drop the asking price.

Everton made a £9m bid for Negredo after an £8.6m move for Twente midfielder Leroy Fer fell through.

Jack Butland’s agreement to swap Birmingham City for Stoke City, and not Chelsea, who had also made a bid, raised a few eyebrows on deadline day, not least among the Manchester United hierarchy.

United scouts have long monitored the young England goalkeeper and Sir Alex Ferguson is a firm admirer of Butland’s promise.

And with David de Gea far from settled at Old Trafford following a string of high-profile errors and his girlfriend’s well publicised desire for the couple to return to Spain, Butland was on a short-list of potential summer targets for the Red Devils.

The Gunners made their move after learning that Jack Butland had signed for Stoke but the England international has returned to Birmingham on loan, ruling out the possibility of Begovic leaving the Britannia Stadium until the summer, when he will be targeted by a number of Premier League big hitters.

Arsenal had identified a new goalkeeper as one of their priorities in the build-up to the window, given growing concerns about the form of Wojciech Szczesny.

They are expected to step up their search for a new No.1 in the coming months, with Begovic, Liverpool’s Pepe Reina and Swansea City’s Michel Vorm among those on the club’s target list.

TOTTENHAM FRUSTRATED WITH INTERNACIONAL OVER DAMIAO

Tottenham are ready to give up on Leandro Damiao after growing exasperated with Brazilian club Internacional during the course of their two-year pursuit of the striker.

The north Londoners made a final bid for the 23-year-old worth £16 million on deadline day, but the offer was rejected by Internacional, who demanded more money spread over fewer payments and also suggested the player was not for sale in January, despite it being the off-season in Brazil.

While Spurs came close to striking a deal, their chances of landing Damiao were over long before the feverish speculation stopped, as they would have needed to apply for a work permit by lunchtime on Thursday.

Arguably the biggest move of the window saw Manchester City maverick Mario Balotelli move to AC Milan – a move that for a while it appeared Micah Richards might also make.

The defender, who has fallen down the pecking order at Eastlands this season, was a clear target of the Italian giants, according to sources in Italy.

However, Milan opted to focus their energies – and finances – on a move for Balotelli instead, leaving Richards to focus on how to usurp Pablo Zabaleta as first-choice right-back for City’s title run-in.

Fulham made a late dash to sign a new goalkeeper on deadline day but missed out on top two targets Jack Butland and Maarten Stekelenburg.

The west Londoners offered £3 million to Birmingham City for Butland but were informed that his move to Stoke City was too far down the line.

The Cottagers had also been in contact with Stekelenburg’s representatives throughout the window and agreed a deal with Roma to sign the Dutchman on loan until the end of the season.

However, the Serie A club pulled the plug on the deal when Stekelenburg was on a flight to London as they could not complete a deal to sign Emiliano Viviano from Fiorentina by the 6pm Italian deadline.