COMMENT: The giant striker has been in sublime form in the opening months of the 2014-15 campaign and has been rewarded with a long overdue call-up to the Italy national side

By Stefan CoertsWhen the 2014 World Cup kicked off in June, playing for Italy would have appeared anything but a realistic objective for Graziano Pelle.

The giant six-foot-four-inch striker had just completed another brilliant season for Feyenoord, but had been overlooked by Italy coach Cesare Prandelli for the finals in Brazil – despite an incredible 50 Eredivisie goals in 57 appearances between 2012 and 2014.

The attacker’s lack of success in the early stages of his career in spells with Lecce, AZ Alkmaar and Parma, in addition to his failure to impress in Serie A (where he scored just 21 goals in 109 games) before his second move to Holland two years ago counted against him.

But Pelle’s situation has changed dramatically since the tournament.

Italy’s disastrous group stage exit led to Prandelli’s resignation, with Antonio Conte replacing him. Unlike Prandelli, the former Juventus coach refuses to ignore Pelle’s achievements in Netherlands and handed the Lecce-born star his maiden call-up for the Euro 2016 qualifiers against Azerbaijan and Malta.

“Graziano represents what I’ve always said. Meritocracy leads to a place in the national team for a player who in two years has scored 50 goals,” Conte commented on the striker’s inclusion.

“Now he is becoming a star in the Premier League after an adventure in Holland. I am curious to see him from close quarters in order to understand if he can help us. He deserved this call-up from all points of view.”

The appointment of Conte is not the only reason behind Pelle’s belated graduation from the Italy Under-21s, with whom he won 11 caps between 2005 and 2007.

After two impressive years in Holland, the prolific attacker earned himself a move to Premier League outfit Southampton and he hasn’t wasted any time to silence those who questioned his ability to perform in a bigger league.

Pelle has already netted four goals in seven league appearances – including a stunning bicycle kick in the 2-1 win over QPR. He has also delivered two assists, guiding his new team to third spot in the Premier League table and thriving under his old boss at Feyenoord, Ronald Koeman.

The striker is no longer the same player who struggled to live up to the high expectations at the beginning of his career.

“If so much time has passed since my last Italy call-up, it means it was entirely my fault. I am now completely mature, both physically and psychologically,” he explained.

“I had to take the long way round, but I got here eventually. It’s better late than never. It’s a very special feeling being back, it’s wonderful to be part of this group.”

Pelle’s success has come at the expense of another physical Italian frontman in the Premier League; Mario Balotelli. Whereas the former Feyenoord man has thrived in his new surroundings, the 24-year-old has looked lost since his return to England after an eventful 18-month spell with AC Milan.

Balotelli did find the net for Liverpool in the Champions League win over Ludogorets, but has yet to score in the Premier League – and was even dropped from the starting XI for their latest game against West Brom.

Having been a disruptive influence at the World Cup – substituted at half time during Italy’s final group game against Uruguay after an alleged bust-up with Prandelli and other team-mates – Balotelli has so far been ignored by Conte.

“Mario has started a new path. It’s not an easy one and I believe he must be given the necessary time to adapt at Liverpool,” Conte commented on the flamboyant attacker’s situation.

“We are following him just as we monitor all Italians who play abroad. I make selections not exclusions, which is something completely different.”

Conte’s remarks suggest that Balotelli could still earn himself a recall if he rediscovers his best form at Liverpool in the months to come.

For now, though, Pelle is very much the man of the moment and he will be desperate to make the most of his long-awaited chance to prove his worth. 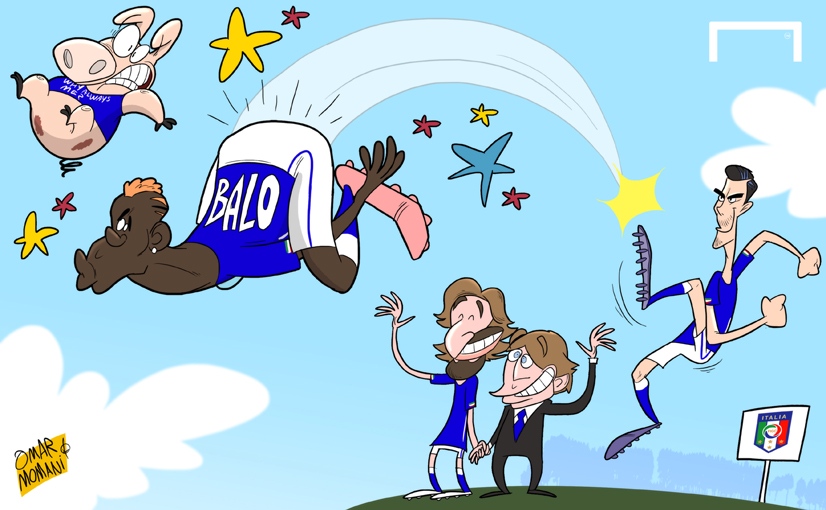