By Tom Maston at Anfield

As Luis Suarez, Fernando Torres and Xabi Alonso returned to Anfield to take part in Liverpool’s All-Star charity match, it was left to the man the event was organised around – Steven Gerrard – to provide the firepower.

Organised to raise funds for the Liverpool FC foundation, a host of past and present Reds stars, as well as a number of familiar Premier League faces, played out an entertaining draw that, for all its star names, lacked quality at times.

Jamie Carragher’s XI took the lead inside the opening ten minutes with Mario Balotelli curling in from 25 yards to leave Brad Jones helpless. The Italy international has struggled to endear himself to the Anfield faithful since his arrival from Milan in the summer, but proved the value he can offer when given a strike partner with whom he can work alongside.

Too many times, particularly in the first half of the season, the former Manchester City man was forced to plough a lone furrow up front for Brendan Rodgers’ side, but with Didier Drogba alongside him he was the outstanding player in a first half that’s pace was ideally suited to his languid style of play.

Along with Drogba he repeatedly stretched the opposition defence, and the pair combined to devastating effect to double their side’s lead as Balotelli’s fine through-ball allowed the Chelsea forward to break the offside trap, round Jones and finish into an empty net. 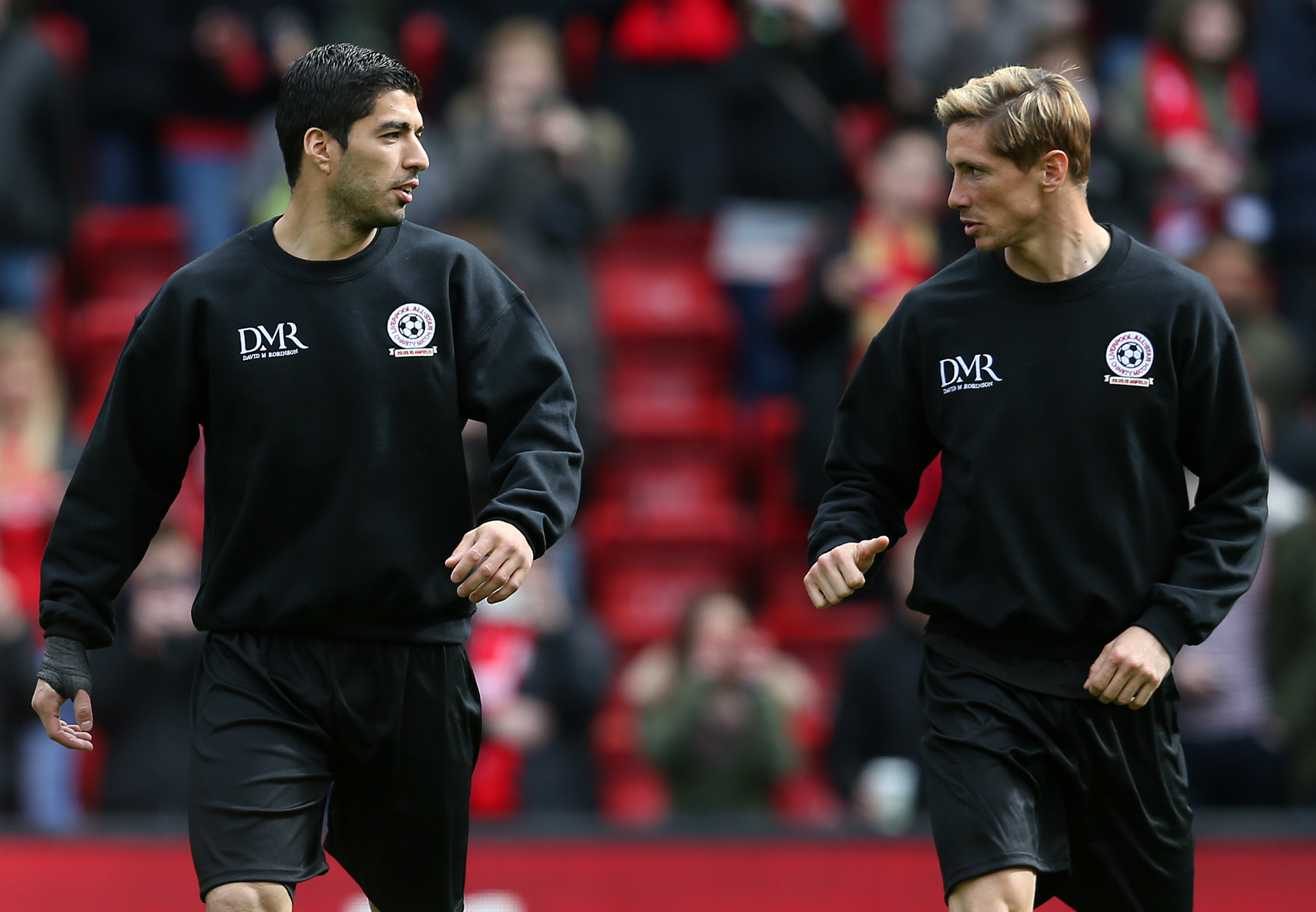 FAMILIAR FACES | Luis Suarez and Fernando Torres, now battling it out in La Liga with Barcelona and Atletico Madrid respectively, returned to Anfield for the match
Gerrard’s team were otherwise enjoying the majority of the territory, with Thierry Henry a willing runner ahead of serial diagonal-pass merchants Gerrard and Alonso, though the former Arsenal striker’s touch did elude him on occasion.

The forward-turned-pundit did provide one of the afternoon’s highlights however, as an outrageous piece of skill led to an opportunity for Ryan Babel on the edge of the box, only for the Dutch winger to fire his shot wide of the post.

Instead it was left to Gerrard to bring his team back into the match as he converted from the penalty spot after Martin Kelly felled the impressive Jerome Sinclair in the penalty area.

Gerrard’s brother, Anthony, came close to equalising shortly before the break with a rasping 20-yard drive his more illustrious sibling would have been proud of, though Pepe Reina was able to force it over the bar.

Moments later the Bayern Munich goalkeeper made an emotional farewell to the Anfield faithful, with many feeling he was not given the opportunity to properly say goodbye when Rodgers somewhat controversially chose to replace him with Simon Mignolet in the summer of 2013. The ovation afforded to Reina as he was substituted around the hour mark was proof enough that his role in the club’s recent history is not forgotten.

Suarez and Torres were introduced to rapturous applause at half-time, and though the overall quality fell away in the second 45 minutes, the duo were able to bring the crowd of 44,903 to life with the odd piece of superb attacking play.

Indeed it was Suarez who won Gerrard his second penalty of the game as the Uruguayan went to ground following the slightest of touches from Carragher. In his previous life as a Premier League player he may well have been chastised for going down so easily, but here it was laughed off by all concerned as Gerrard sent Peter Gulacsi the wrong way from 12 yards.

Both sides pushed for a winner in the closing stages, but neither could find the all-important third goal on what was a special day for any modern-day Liverpool supporter.