The Reds have confirmed the arrival of the controversial Italy international, who only moved to the Rossoneri from Manchester City in January 2013, in a deal worth €20 million

The deal for the Italian, who scored 18 goals in all competitions last season, will cost around €20 million, with Balotelli flying in to complete a medical on Friday before putting pen to paper on a long-term deal at Anfield.

Balotelli signed for boyhood club Milan in January 2013 after three often tumultuous years at Manchester City, but has been unhappy at San Siro for several months while club owner Silvio Berlusconi was keen to move him on.

The 24-year-old clashed with former City boss Roberto Mancini in training during his time in Manchester, and was never far from the headlines after setting off fireworks in his apartment.

In the wake of that incident, Balotelli lifted his jersey to reveal the now famous “Why Always Me?” message after scoring against in the landmark 6-1 victory against Manchester United in 2011.

Liverpool boss Brendan Rodgers had been scouring Europe for a replacement for Luis Suarez all summer, and was continually linked with a move for Monaco striker Radamel Falcao.

The Northern Irishman had in fact completely ruled out Balotelli’s arrival earlier this summer: “I can categorically tell you that he will not be coming to Liverpool. He is a wonderful player, but he is an AC Milan player.”

Balotelli scored 20 Premier League goals in his 54 appearances in England, and 26 in 43 Serie A matches since moving back to Italy with the Rossoneri. 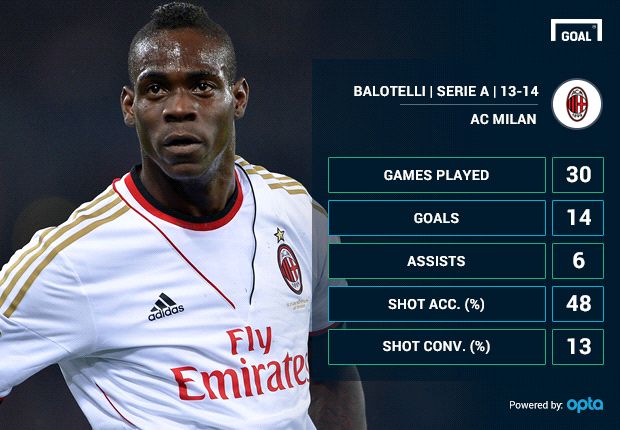