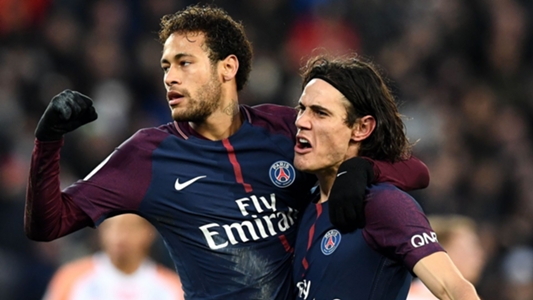 Neymar might be out of action, but it seems impossible to keep the Brazil star out of the news.

After suffering a broken foot against Marseille last month – an injury that threatens to keep him out for the rest of the Ligue 1 season – the striker has been forced to amuse himself away from the field.

This week, he has taken the opportunity to experiment with new hairstyles.

The superstar has gone for something rather outlandish, allowing his friends to talk him into road testing some dreadlocks.

On the training ground, meanwhile, Adrien Rabiot joked about rumours that the PSG dressing room has been divided.

“A member of the ‘Brazilian clan’ having a joke with the ‘French clan’!? Look out Marquinhos, you better not do this again!! Love you boys,” he joked.

When they got onto the field, PSG were pushed in a thrilling match against Nice, which they won 2-1 thanks to a late header from Dani Alves, leaving them just three wins short of sealing the title.

“One more big step towards our goal,” the defender said. “Only the champions will be remembered and for one reason only: they know that the way is difficult but it will be worth it in the end. Never stop fighting for what you want in your lives.”

One man who was not left content was Mario Balotelli, who was on the losing side despite a fine performance from Nice, who showed the kind of form that drove them to the Champions League qualifiers this season.

He told his Instagram followers: “If we would have played like today every game we would be first in the Ligue at this point! Well played guys.

“Marcoli, always nice to see you!!! Good luck for the friendly matches in the national team. You are too strong.”

If we would have played like today every game we would be first in the Ligue at this point ! Bravo les gars. Marcolì sempre bello vederti !!! in bocca al lupo per le partite amichevoli in nazionale tvb sei troppo forte!

Balotelli is expected to leave Nice in the summer but has enjoyed his time on the south coast to date.

“Happiness is the key,” he posted in a simple message earlier in the week.

Ligue 1 finished on Sunday with a thrilling encounter between Marseille and Lyon, which swung one way then the other. Kostas Mitrogolou seemed to have pinched a goal that would have sealed a point but Memphis Depay reopened the Champions League race with a late winner to give OL a 3-1 win.

It had several big-name players gripped, including the injured Lyon star Nabil Fekir and ex-Marseille full-back Benjamin Mendy, who is now with Manchester City.

After a series of thrilling games, Ligue 1 takes a week off for the international break, with PSG and Monaco preparing for the Coupe de la Ligue final in a fortnight’s time.