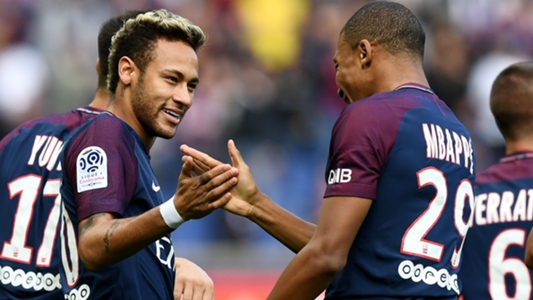 Neymar is the hottest name in France at the moment, so it was only natural that he was one of the biggest movers and shakers at Paris Fashion Week, which has been ongoing for women’s clothing in recent days.

The Brazilian is the face that everyone wants to be associated with their brand and as such has been highly visible away from the field.

While he has clearly been enjoying himself socially – his father told Canal+ on Sunday that the player “loves everything about Paris” – he has continued to excel on the field.

His Paris Saint-Germain side produced arguably their two best performances of their season as they brushed aside Bayern Munich 3-0 in the Champions League then obliterated Bordeaux 6-2 at the weekend.

Following the win over the Germans, he posted a picture of himself celebrating a goal with Fashion Week buddy Dani Alves and commented: “Focus, Strength and Faith .. that’s what keeps you alive.”

“Great victory today, congratulations team! Thanks for the hug “golden boy” @k.mbappe29,” Neymar posted after the latter success on Saturday.

‘The Golden Boy’ has, of course, become another instant favourite at Parc des Princes.

Born in Paris, he has taken to playing for Unai Emery’s side like a natural and, of course, is another great media draw. He might not yet command quite the same attention as Neymar, but he showed he can command a bit of swagger when it comes to the catwalk, too.

The 18-year-old was also on the scoresheet in the thumping success over Bordeaux and offered a message of solidarity to France team-mate Benjamin Mendy, who had a serious knee ligament injury confirmed this week.

After finding the net against Bordeaux, he held up two fingers from each hand, which was a nod to the Manchester City player’s squad number.

While it was a good week all-round for PSG, it was a mixed week for Mario Balotelli, whose Nice side continued to make waves in the Europa League by beating Vitesse at home but who crashed to a 4-2 home loss to Marseille in Ligue 1.

The Italian, who said that he needs a coach who “breaks his balls” to get the best from him this week, was on target after only four minutes in the derby against OM, but his side eventually slumped to defeat.

Patrice Evra, who had started Marseille’s midweek defeat at the hands of RB Salzburg, did not, however, feature in that game as he continues to face an uphill battle for a starting spot, with Jordan Amavi preferred to him. However, the upbeat veteran was delighted with the impact he has made on social media, having hit the milestone of 3 million followers.

MASSIVE THANK ??????It’s been only 1year 4months I have been on Instagram… i have already spread all around the #world ?my I LOVE THIS GAME! Moto. ?We reached 3 million #followers together #sharing #love and #happiness and being #funny #smile and #crazy sometimes, ?????but we still need to #spread the #message Unfortunately in my country there a few spreading negativity instead of positivity but I’ve got #hope and #faith that together we can make everyone love this game! No grumpiness allowed. If you want to be grumpy please don’t use my Instagram to spread your negativity???always love this game!!!???#ilovethisgame #goodvibes #positivevibes #motivation #beapanda

Evra still wants more from his social media account, while the Marseille will be hoping he can show more on the field.