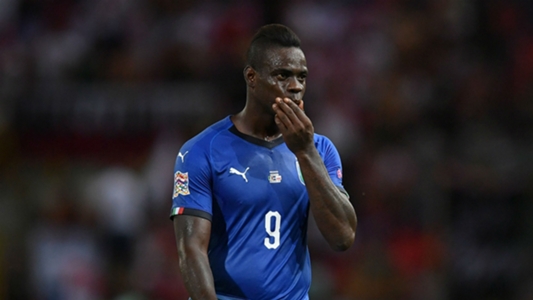 Roberto Mancini says Mario Balotelli remains in his Italy plans but insists it is up to the Marseille striker to prove his worth.

Balotelli has endured a turbulent campaign, failing to impress under Patrick Vieira at Nice after a reported move to Marseille collapsed prior to the 2018-19 season, before belatedly moving to the Stade Velodrome last month.

In addition, the 28-year-old’s role with the national team has been similarly uncertain.

Balotelli returned from a lengthy exile for Mancini’s first game in charge, scoring in a win against Saudi Arabia, but he has not featured since a Nations League draw with Poland last September.

The forward has played in Marseille’s past two matches, though, including scoring after coming on from against Lille, and Mancini is open to the player making an international return in the coming months.

“We haven’t lost sight of anyone. Mario is part of the group,” the Italy coach told a news conference. “He knows that well and he also knows that it depends on him, not me.

“So far he’s played little. [On Sunday] he played only his second game in months. But if he scores consistently between now and the end of March, maybe he could come back.”

Mancini has included Sampdoria’s 36-year-old forward Fabio Quagliarella, who last month equalled a Serie A record by scoring in 11 consecutive games, in his squad for an upcoming training camp.

Quagliarella has 16 league goals this season – only Cristiano Ronaldo has scored more in Serie A this term – and Mancini admits he could not ignore the veteran’s form.

“He deserves to be here, despite his age,” Mancini said of Quagliarella. “He is playing well, scoring goals and is one of the top-scorers [in Serie A].

“He has always been a very strong player, but he himself knows well that he may not be the future of the team.”