Liverpool captain Steven Gerrard’s mantra – ‘we go again’ – has not extended into this season as yet. The hosts may have beaten West Brom 2-1 at Anfield on Saturday, but they are a side that remain lacking in cohesion and nervous in possession, at odds with the team who so emphatically thrashed the Baggies last year.

As it was, superb performances from Adam Lallana and, in particular, Jordan Henderson dragged the Reds over the line on a day where many of their symptomatic problems remained but were overcome for now.

Henderson’s star turn, which included a goal and an assist, personified the workmanlike nature of the victory but heading into an international break Brendan Rodgers will likely care little; two weeks to stew on another misstep would have been the last thing he needed. Now he has a fortnight to address the misgivings.

After a summer of major upheaval, at the end of a season of so much promise which ultimately reached a cruelly crushing climax, the dust has yet to settle and scars still remain for some. There is tentativeness about their play which stands in opposition to their devil-may-care approach to dismantling teams, particularly at Anfield, last year.

Everything Liverpool do at the moment takes toil, a far cry from the free-form expression that has typified their very best performances. With the exception of Tottenham, no team has been subjected to an offensive battering by the Anfield outfit this season.

Defensively, Dejan Lovren hasn’t settled, underlined again here by his rash penalty concession, although the decision to award the offense as inside the area rather than out was dubious at best. Martin Skrtel inspires no confidence and Alberto Moreno, for all the good work he produces on the left, must remember his defensive duties. All-too often Lallana was dragged back towards his own touchline as Moreno sauntered back from the opposite end of the pitch.

But for all that, sometimes a win is all that’s necessary to deflect some of the hostility. Rodgers made a significant call to leave out Mario Balotelli and give Rickie Lambert his first Premier League start. Had West Brom came here and taken anything, that decision would have merely fanned the flames and given ammunition to those suggesting that Liverpool are a club without a plan as things stand. 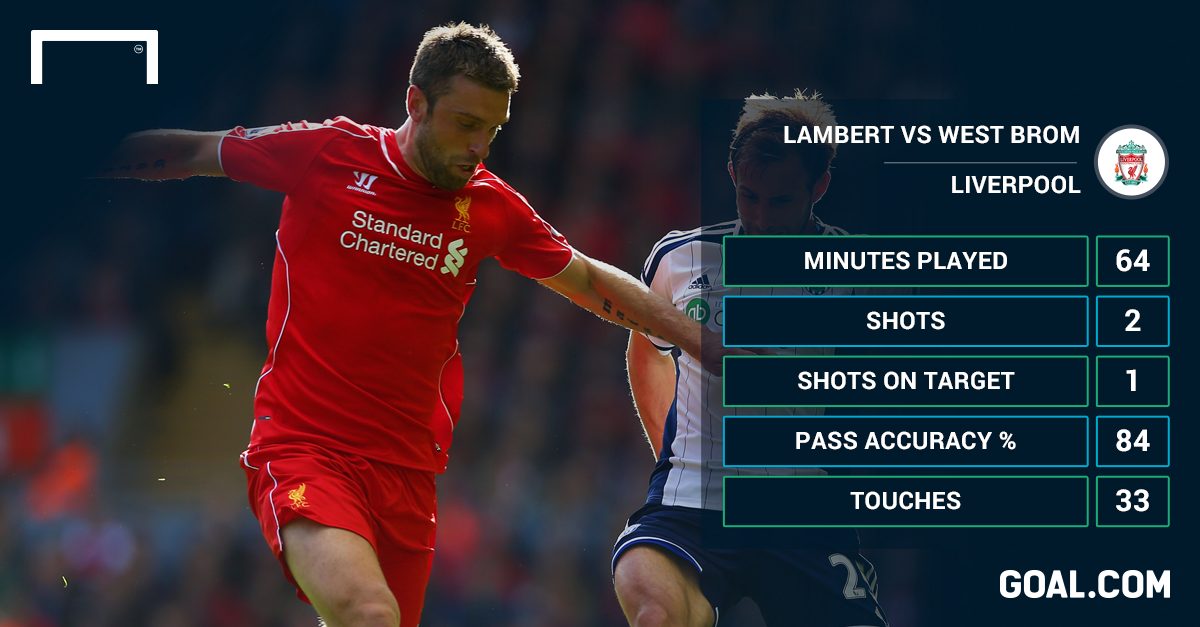 Balotelli indeed has two weeks to think deeply about his own involvement in this side. Benched after Rodgers admitted that he wasn’t doing enough for the team following the midweek defeat at Basel in the Champions League, his last 25 minutes didn’t differ much from his performances over the last month. Lambert may not be a marquee name but at least he ran the flanks, harassed defenders and attempted to get involved even when things didn’t come off for him.

Rodgers has made a statement that he won’t indulge Balotelli to the extent that others have in the past. He’s already stated that the player is a “calculated risk” and that “it’s up to him to try and make it work for the team.” On Saturday, he decided making it work meant leaving him out.

Whether treating Balotelli in this way, punishing him rather than mollycoddling him, will have the desired effect is something buried deep in the curious mind of the Italian. What he does next is anyone’s guess.

But Rodgers is well aware that solving the Balotelli Rubik’s Cube is just one of many areas where Liverpool are not reaching the required standard. With a hard-earned victory against West Brom in the bag, he has some breathing space to take stock of his team’s start and decide how to take them forward.