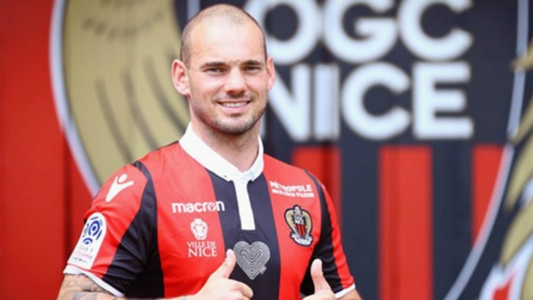 Wesley Sneijder says Neymar’s world-record move to Paris Saint-Germain had no influence on his decision to move to Ligue 1 with Nice.

The Netherlands star signed what is reported to be a one-year deal with Lucien Favre’s side on Monday after leaving Galatasaray at the end of his contract.

Nice -1 against Troyes at 7/5 with dabblebet

The former Inter and Real Madrid man is the latest high-profile name to try his hand in France’s top flight, with his move coming just days after Neymar sealed a €222million switch to PSG from Barcelona.

But Sneijder insists that it was Nice’s own project, and not the thought of following in the footsteps of Neymar or former PSG striker Zlatan Ibrahimovic, that convinced him to move to France’s south coast.

“Talent and good players help the league to develop further but, to be honest, I didn’t come here for that,” he told a media conference.

“The most important thing for me is the team, and in this team, there are excellent players with a good mentality.

“I’m here for that, not because Zlatan played in France or because Neymar came here.”

Sneijder also denied that former Inter team-mate Mario Balotelli had any input on his decision and stressed that he has not moved to the Riviera simply to enjoy the lifestyle.

“The quality of life is very good in Nice, but it was also like that in Madrid or Milan. I haven’t come here for that.

“I know Balotelli but I don’t speak to other players to make decisions. I speak with the coach and with the directors.”

Nice have been drawn against Napoli in a daunting Champions League play-off tie, but Sneijder, who lifted the trophy during a remarkable treble-winning season with Inter in 2009-10, says they can beat Maurizio Sarri’s side.

“I know Napoli and of course we have a chance!” he said. “And believing is very important. When you believe, you can do it, that’s what I always say.

Why Neymar could end up at Real Madrid

“In 2010, with Inter, we never thought we would win the Champions League. Over the course of the games and the season, we started to believe it, and we got there.”