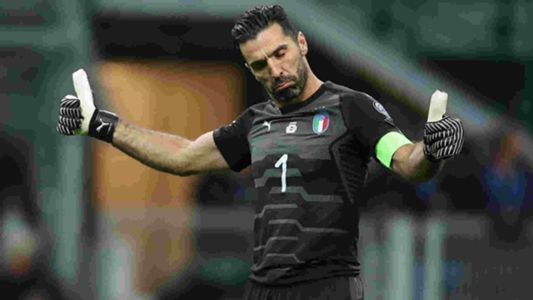 Italy caretaker boss Luigi Di Biagio expects Gianluigi Buffon to return to international duty for the friendlies with Argentina and England next month.

Juventus veteran Buffon announced his retirement from the Azzurri, along with club-mates Andrea Barzagli and Giorgio Chiellini and Roma’s Daniele De Rossi, after the defeat to Sweden in the World Cup play-off in November.

Di Biagio does not think Barzagli or De Rossi will reverse their decisions before next month but believes Italy’s record caps-holder, along with Chiellini, will make at least a temporary return.

“I had some meetings with the veterans because I understood some of them wanted to quit,” Di Biagio told a news conference at the start of a training camp at Coverciano.

“I talked to Buffon to find out if he wanted to continue. It’s not fair that his last game should be the one against Sweden. I proposed he should come back for one, two or three games. Gigi will probably be there in March.

“With the other players, without going into detail, I spoke with many of them. Barzagli and De Rossi will not be there, Chiellini yes.

“We want to relaunch the team with enthusiasm.”

“The best goalkeeper in the history of the game.”

Even if Buffon does not extend his international career beyond March, Di Biagio is confident about Italy’s goalkeeping options in the future, with Gianluigi Donnarumma, Mattia Perin and Alex Meret among those vying for the position.

“We’re doing well with goalkeepers when you look at the next 20 years,” he said. “When Buffon stops, we’ll still have our backs covered.

“Gigi’s story doesn’t have to end with that Sweden game.”

Di Biagio also hinted at a possible recall for Mario Balotelli next month.

The striker has not played an international match since the 2014 World Cup but has turned his career around somewhat in Nice, scoring 13 goals in 19 Ligue 1 appearances this term.

“I follow him constantly,” he said. “When the time comes for the call-up, we’ll assess whether we want to take him or not.

“We haven’t made any decision yet. We’re in a difficult position and there isn’t a lot of choice, but we have to create the right enthusiasm after the disappointment of the World Cup.”