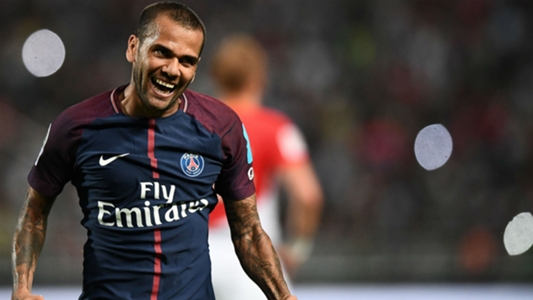 Rather than events on the football field, the social media post that has caught the attention most in France this week came from Dani Alves.

The Brazil star might have been left out of the starting XI of Paris Saint-Germain’s forgettable 0-0 draw with Montpellier on Saturday, but he still managed to hit the headlines domestically when he took to Instagram to make an appeal for a lost dog.

“I lost my beautiful doggie around Malmaison Forest (Paris)… her name is Mari… please let me know if you find her. She is my life,” the former Barcelona and Juventus full-back posted.

#Repost @joanasanz (@get_repost) ??? I lost my beautiful doggie ???? around Malmaison Forest (Paris)… her name is Mari… please let me know if you find her ?? she is my life ?

Many publications instantly jumped to the conclusion that Alves had lost his dog, but they missed the fact he had advertised that he was posting on behalf of Brazilian model Joana Sanz.

Thankfully, the story had a happy ending as Mari was returned to her owner, who posted a video of herself reunited with her pet, albeit three days later.

I can’t believe that my beautiful mouse is here with me ?thank you so much @emmaben77 for your help in France, I had never met someone like you at work… you are super nice and incredible person ?? muchas gracias @sulidominguez por contactar con todas las paginas de animales perdidos en Francia…. nunca me habría esperado una ayuda tan perseverante de una persona que casi no veo, te quedas grabada en mi ? and thanks a lot to all people worried for me? #mariathome #blessed

There was more good news for Dani Alves earlier in the week, as he was nominated for the FIFPro World 11 along with club and international team-mate Neymar. If the striker was quiet over the award, the full-back offered his reaction on social media.

“When you despise his strength, is when a warrior differs from the rest, no matter how old he is, no matter where you are, no matter who you are, never stop being what brought you here … never stop fighting, never stop respecting what you do, never stop fighting for what you want, but above all, never abdicate your values, they will keep you competitive and winning until you decide to put an end to your story and inspire other little dreamers like you … … when this is not enough, try to overcome yourself every day and every year. WHAT A YEAR,” he posted.

Neymar, meanwhile, was busy nursing a bruised big toe on his right foot, which kept him out of the weekend’s match with Montpellier. He will be back for Bayern Munich on Wednesday, and he took time to congratulate captain Thiago Silva on his birthday.

“Congratulations to my capitain @thiagosilva_33, who, besides being one of the greatest defenders I have seen, is my friend … I celebrate not only your day but your friendship, brother. I wish you all the best in your life !! I love you,” the world’s most expensive player said.

Meanwhile, in what was otherwise a quiet week for him, he name dropped another famous sporting friend, this time Formula 1 driver Lewis Hamilton.

He is not the only one with a famous friend, though. Nice striker Mario Balotelli has caught up with Marco Materazzi, his former team-mate at Inter.

The centre-back, though, is perhaps most famous for his role in the 2006 World Cup final, when he provoked the great Zinedine Zidane to breaking point and caused the France star to aim a headbutt at him. “It’s always great to see you, brother,” the striker commented.

Balotelli has been in good form for Nice and was on target as they came from two goals down to draw 2-2 with Angers on Friday evening.

Before the game, Mario urged his team to “focus”, and while they struggled to do that, they did eventually get over the line.

Meanwhile, Patrice Evra’s rough spell of form continued, to such an extent that he was left out of the Marseille squad that recorded a much-needed victory over Toulouse in the Sunday night fixture.

He had to be content with posting videos from his summer holidays, including this unusual conversation with a camel.

Patrice, unfortunately, may not be loving the game just quite as much as he usually does.