Arsene Wenger’s reputation as the most reluctant of big spenders has been well earned but that should not detract from Frenchman’s penchant for extreme risk-taking – the signing of Mario Balotelli, however, would surely represent the biggest gamble of his entire Arsenal tenure.

The professorial Arsenal manager and the wild child of Italian football would make for the oddest of odd couples but the attraction, on both sides, is obvious.

For Balotelli, this latest incarnation of Wenger’s Arsenal is at the perfect stage of its evolution to help bring out the best in him. Pace, dynamism and vision are the hallmarks of a midfield that too often have seen their geometric approach work go to waste ever since Olivier Giroud was plucked from Montpellier to replace Robin van Persie.

Unlike at Manchester City, the 23-year-old would not be competing with three equally gifted strikers for a starting place, while a supporting cast of Theo Walcott, Mesut Ozil and Aaron Ramsey would share the creative and goalscoring responsibilities that lie almost solely on his shoulders at Milan.

For Wenger, the concerns over the player’s temperament aside, Balotelli is, at his best, every inch the striker that his side require. Brute strength and devastating finishing are his trademarks but also he boasts a speed of thought and movement that are not exactly the hallmarks of the often-ponderous Giroud’s game.

The Frenchman has battled gamely for two seasons now, ploughing the loneliest of lone furrows, and, while 39 goals in 79 appearances represents a more than fair return for a player of such obvious limitations, Wenger’s pursuit of, first, Gonzalo Higuain and, latterly, Luis Suarez last summer represented a tacit admission that his faith in Giroud was anything but total.

Strange, then, that Wenger is seemingly prepared to go all in and stake his reputation on one of the most volatile and fascinating personalities in world sport. The Gunners boss has worked with testing characters before – Thierry Henry was at times anything but a model student, while Cesc Fabregas and Robin van Persie possessed a brattish element to their characters – but Balotelli is something different altogether.

A succession of high-profile managers have attempted to unlock the potential that clearly lies within but never with any lasting success. Jose Mourinho’s time was too precious to spend on this problem child, Roberto Mancini treated Balotelli like a son and ended up coming to blows with him on the training pitch, while even a character as sage and composed as Clarence Seedorf was forced to admit that Balotelli was best left to his own devices.

At 64 years of age and over 1000 games into his Arsenal reign, it surely must be regarded as a positive sign that Wenger backs himself to succeed where so many others have failed. In truth, however, even if he were able to keep Balotelli on an even keel it would represent a battle only half won, for this is a player who has flattered to deceive since he returned to Italy.

Spectacular goals and the iconic double for Italy against Germany in the European Championships two summers ago have punctuated long spells of mediocrity. Indeed, Balotelli has scored just 18 goals from open play since the start of the 2012-13 season and nine penalties.

That chances-to-goal ratio would rank Balotelli 68th and last of any player who scored five or more goals from open play last season in the Premier League and would represent the third-worst open-play conversation rate of any Arsenal player, with only Bacary Sagna (8.33%) and Mikel Arteta (0%) faring worse.

Clearly, Balotelli remains the roughest of rough diamonds. Perhaps Wenger’s time and effort would be better spent elsewhere but a union of their rather different talents would make for compelling and compulsive viewing. 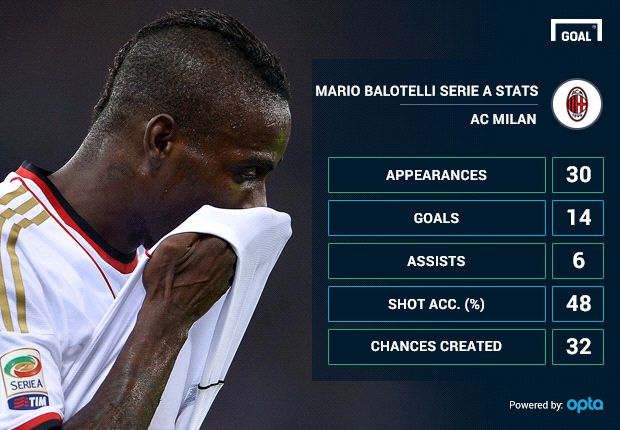