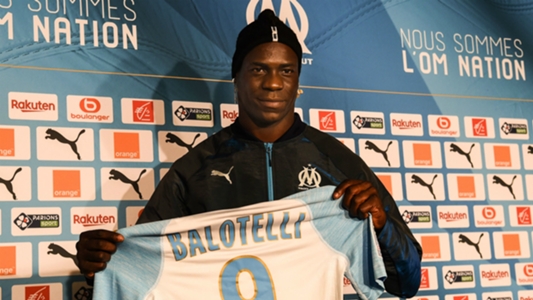 Italian striker Mario Balotelli completed a free transfer to Marseille on Thursday, joining after being released from his contract by fellow Ligue 1 outfit Nice.

The 28-year-old ends his two and a half year spell with Les Aiglons by moving to the Orange Velodrome, despite having failed to find the back of the net in ten league appearances this season.

Balotelli joins Marseille on a six-month deal until the end of the current campaign and is expected to earn around £2.7m ($3m) in wages during that short spell.

The enigmatic centre forward scored 42 goals in 64 appearances in total at Nice, but he has found himself in and out of the starting XI this term after a run of poor performances.

He could make his debut for Marseille this coming Friday, as the French giants host Lille in a huge Ligue 1 clash, with nine points separating the two sides in the table.

Speaking at the official press conference after his switch was announced this afternoon, Balotelli aimed to temper expectations from his new fanbase, stating that his main focus is to simply help the team.

“I know that the fans are expecting a lot from me,” he began. I have to train, that’s what I miss, but I feel good, I’m in good shape.”

“Marseille has a passionate fanbase, all players see it, it’s something we don’t forget, I had deliberately published my message to the OM supporters because I was hoping to come here “

“Scoring goals is not a question of life or death, it is not the priority, I will not die if I do not score quickly”

“My goal is to score as many goals as possible, but the most important thing is the team.”

Les Olympiens sit seventh in the standings and still harbour faint hopes of qualifying for next season’s Champions League, with six points currently between them and third-placed Lyon.

For Balotelli, this latest move may mark the last chance he has to succeed at the highest level of the game, having endured major highs and lows over the last few years.

Spells at Inter, Man City and AC Milan in the earlier stages of his career gave him the opportunity to showcase his talent and although he impressed sporadically, he was never able to sustain any kind of form.

An ill-fated spell at Liverpool between 2014 and 2016 saw him slip out of the limelight completely before he rediscovered his goalscoring touch with Nice and now he will aim to do so again in new surroundings.

He finished his first public appearances as a Marseille player by sending a message to the fans, as he added: “I hope that you come Friday and that you will support the team as I saw it with Nice. The team and I will do our best to win.”